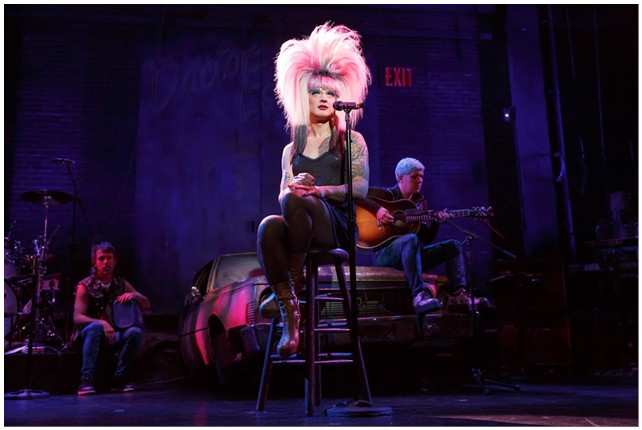 “Hedwig and the Angry Inch” needs to be Smaller, More Intimate

*** Recommended*** Maybe because cult classic “Hedwig and the Angry Inch” is one of my favorite rock shows, I tend to be hyper-critical.  I think “Hedwig” works best when it’s stripped down and intimate.  After all, Hedwig is sharing her most intimate secrets with the audience.  Because of this, I had mixed feelings about the idea that “Hedwig” was going on tour.  I definitely wanted to see the show again, but I was worried about the look and feel of the production.  As it turns out, the “Hedwig” playing at the Oriental tries to be intimate, but just can’t pull it off.  3 Spotlights

“Hedwig and the Angry Inch” runs through March 19th at the Oriental Theatre, 24 W. Randolph, Chicago. Running time is 1 hour, 50 minutes, no intermission.  Performances are Tuesday through Friday at 7:30 pm; Saturday at 2:00 and 8:00 pm; Sunday at 2:00 pm, with an additional 2:00 pm matinee on March 15th and a 7:30 pm evening performance on March 12th. Tickets range from $35-$108.  The least expensive parking option is the garage on Randolph between Michigan and Wabash. FYI (800) 775-2000, all Ticketmaster retail locations, www.ticketmaster.com, and www.broadwayinchicago.com.