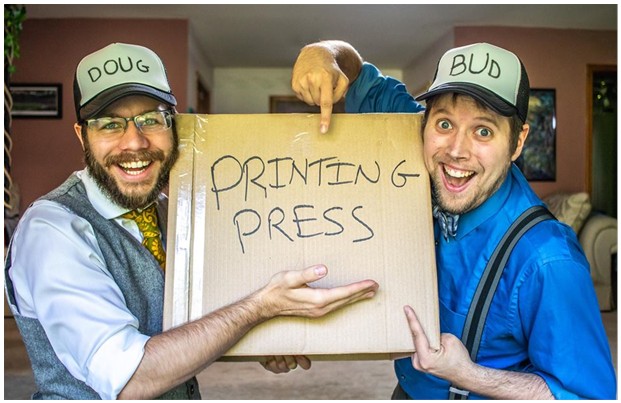 “Gutenberg! The Musical!” is lots of fun!

Ensemble Theatre Company’s production of “Gutenberg! The Musical!” is a silly but very funny story about two guys, Doug Simon (Zachary Gipson) and Bud Davenport (Dustin Ritchea), who are performing the first reading of their new musical on a make-shift stage in borrowed space, hoping that one of the Broadway producers rumored to be in the audience will give them a contract. 3 ½ Spotlights

The Art Barn, which really is an art studio with paint-spattered floors to prove it, provides the perfect setting for a make-shift stage. Cloth-draped furniture has been pushed against the walls and there’s lots of interesting art work on the walls. Audience seating consists of several rows of mismatched chairs with a narrow aisle down the middle. A home-made light board, which cleverly utilizes wall-switch dimmers, sits on a small table less than a yard from the front row.

At first glance, “Gutenberg! The Musical!” seems like simple little show until you realize that these two actors are playing sweet, sincere Doug and dorky but earnest Bud, as they don labeled baseball hats and play everyone in Gutenberg’s village. Doug and Bud aren’t particularly talented, but they are enthusiastic as they sing and dance their way through the show.

According to Doug and Bud, very little is actually known about Gutenberg – other than the fact that he invented the printing press – so they’ve written their play as historical fiction, which means they made stuff up! As the show rolls along, they frequently digress to explain that the previous song has been the ‘cheery opening number’, the ‘emotional ballad’, the ‘totally irrelevant charm song’, the ‘high-octane rock song’ for the Act One finale and so on. There’s even a tiny sing-along in the final number.

In their play, Gutenberg lives in a beautiful, but dirty village, Schlimmer, where almost no one knows how to read. The villain of the story, the totally Evil Monk, worships Satan (a stuffed cat). He loves to torment his assistant and sometime henchman, the not-so-evil Young Monk, by throwing pencils. Evil Monk, who gets his power because he owns the only Bible in Schlimmer, will do anything to keep people illiterate.

Some of the hats read Dead Baby, Woman, Beef Fat Trimmer, Another Woman, Boot Black, Daughter, Drunk #1, Drunk #2, Anti-Semite, Old Black Narrator, Rats, etc. I had to laugh when the hats/Rats became back-up singers, and joined a dancing chorus line. “Gutenberg!” starts a little slow, but when it gets going, it’s very silly; in fact, it reminded me of the early days of Monte Python. I was laughing out loud by the second song.

I really wish I could have seen “Gutenberg!” during opening weekend, but I had a family weekend planned.