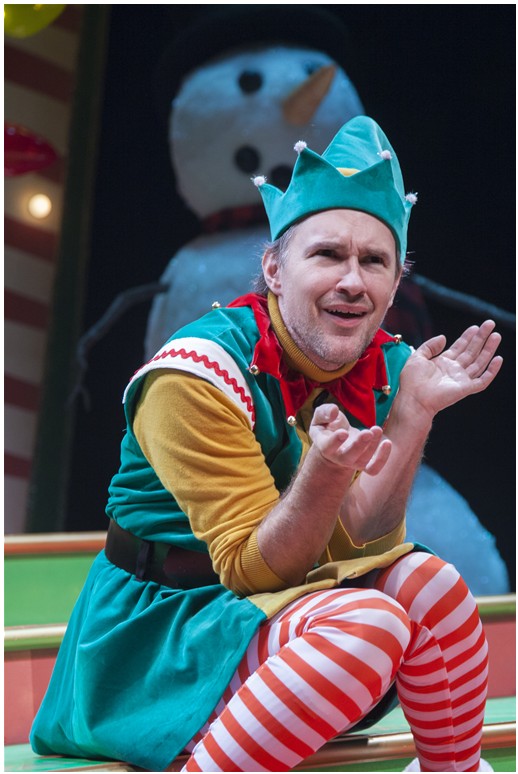 **** Recommended **** Goodman Theatre’s production of “The Santaland Diaries”, written by David Sedaris and adapted for the stage by Joe Mantello. In his early days as a struggling writer in New York, Sedaris took a job as an elf at Macy’s Department Store. It’s irreverent, mischievous, snarky, and really, really funny. 4 Spotlights

Matt Crowle stars in the one-man show. Wearing street clothes, he talks about moving to New York to be a writer. He figured he’d walk into the “One Life to Live” offices and snag a writing job within weeks. When reality caught up – and he was down to his last $20 – he applied for a seasonal job he thought would be a snap. He quickly learned that Macy’s took the job a little more seriously, making him go through interview after interview and drug tests, too.

Announcing he’d gotten the job, Crowle opened one of the conveniently placed over-sized blocks on Kevin Depinet’s fanciful Santaland set and pulled out his costume. He described each item as he put it on, starting with a gold turtleneck. Shedding his cords, he revealed red and white candy-striped tights. Over those, he wore a green velvet jacket/smock, green pointy-toed shoes and a charming green elf hat.

For the next 45 minutes or so, Crowle shares Crumpet’s experiences in a series of vignettes. Elf placement, near Santa or far, far away, determined whether he’d be helping people line up or hurrying them out of Santaland. Over the next month or so, he dealt with abusive customers, whining and/or crying children, ‘photo’ mothers and a pair of obnoxious fathers who asked Santa for women with big boobs. He had stories about the other elves and the various Santas, a couple of whom should never have been allowed out in public.

Last time I saw “The Santaland Diaries” was back in 2009 at Theater Wit with Mitchell Fain, who was way, way more sarcastic than Crowle. I remember straggling in a tiny bit late – couldn’t find a parking place – to have Fain tell me and my friend Karen that we had to buy him a drink to make up for being late. We did, and he drank it!

“The Santaland Diaries” runs through December 30th at the Goodman’s Owen Theatre, 170 N. Dearborn, Chicago. Seating is first come, first served, so you’ll probably want to get there early. Most reasonable parking options for the Goodman is the Government Center garage on Lake between LaSalle and Dearborn, online advance payment at www.interparkonline.com/goodmantheatre, $17.