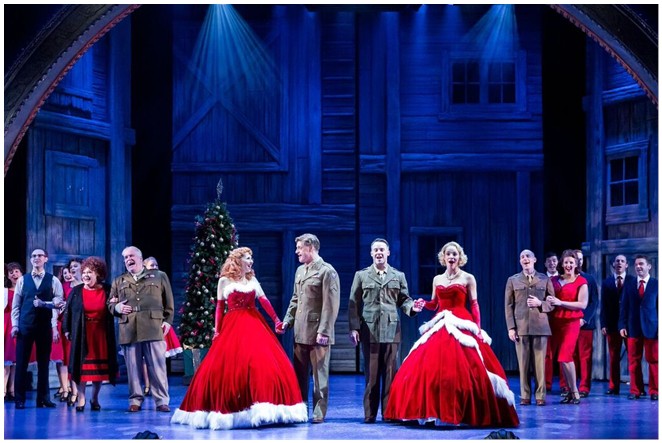 Get Your Holiday Spirit with “White Christmas” at Drury Lane

**** Highly Recommended **** Get yourself in the holiday mood with Drury Lane’s classy “White Christmas.  I guarantee you’ll get that whole nostalgia thing going when the fabulous cast sings the title song.  You’ll be humming along to Irving Berlin’s wonderful melodies.  I give “White Christmas” 4 BIG Spotlights.

In case you’ve been living under a rock and don’t remember the story, it mostly takes place in 1954.  Don’t expect a clone of the movie, however.  The shorter stage version is more of an homage to the classic film.

Jump into the future ten years; Wallace and Davis are Broadway stars, while Sheldrake is a producer on the Ed Sullivan Show.  After an appearance on the show, the guys visit a club to check out the Haynes Sisters – their brother, Freckle-Face Haynes, the dog-faced boy, was in their unit – as a possible act for their new revue.  Impressed by the act, the guys invite Betty (Gina Milo) and Judy (Erica Stephan) to join them for a drink.

Phil and Judy hit it off, so instead of leaving for Florida, Phil tricks Bob into following the sisters to the Pine Tree Inn in Vermont.  When the guys find out that the owner is General Waverly, who is going broke because there’s no snow, they come up with a scheme to save the inn.  They’ll open their new revue in the barn and fill the audience with their old army buddies.

When their troop arrives in Vermont, Stage Manager Mike Nulty (Matt Crowle) bewails the fact that he has five days to put a show together – and he has to deal with Ezekiel Foster (Dale Benson), who apparently comes with the barn.  Hinting to get a part in the show, the General’s housekeeper/factotum Martha Watson (Alene Robertson) belts out “Let Me Sing and I’m Happy”.  The General’s granddaughter, Susan (Maya Lou Hlava and Avery Moos alternating), even tries to get in.

Irving Berlin’s wonderful music is what makes this a special show with songs like “Happy Holiday”, “Sisters”, “the Best Things Happen While You’re Dancing”, “Count Your Blessings Instead of Sheep” and “Snow.”  Then there are the fabulous dance numbers, with one of my absolute favorite tap numbers, done all in black and white, “I Love a Piano”.

People, people, people!  If you love a number during the show, wait til its done to applaud.  It is so rude to start clapping in the middle of a song.  I’m just saying, don’t do it!  OK, I’m done ranting, back to my review.