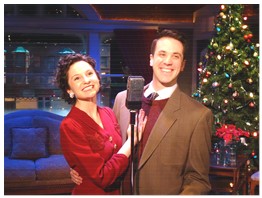 Get in the Christmas Spirit with “It’s a Wonderful Life: Live in Chicago”

**** Highly Recommended **** If you’re looking for a holiday-themed play for your family, one of the best choices anywhere would be American Blues Theater’s production of “It’s a Wonderful Life: Live in Chicago!”  The ‘live radio’ audience (you and your family) gets a rare opportunity to go behind the scenes and watch a talented cast bring Bedford Park to life.  What can I say?  It’s just not Christmas without George Bailey!  “It’s a Wonderful Life” gets 4 Holiday Spotlights!

While the audience is being seated, Announcer/Piano Player (Michael Mahler), plays and sings holiday tunes.  Meanwhile, members of the cast circulate through the audience offering people the chance to write a “telegram” to be read on the air.  Before each performance, the “Soldier Spotlight” honors a serviceman or servicewoman.

A factoid – before Frank Capra ever made his movie, George Bailey’s story was a hit on radio.  The Announcer mentions that as he’s prepping the audience on when and how to applaud.  A little closer to show time, he encourages everyone to join in singing holiday songs like “Jingle Bells” and “Frosty the Snowman” while on the screen, a handy little ball bounces over the words.

After a five second count-down, the ON AIR sign lights up, and the broadcast begins.  Everyone in the cast plays at least two parts – by slightly changing their voices/inflections/accents.  Foley (Shawn J. Goudie) provides the sound effects.  The actors and their major parts – Zach Kenney is George Bailey’; the versatile John Mohrlein plays both Clarence and Mr. Potter, as well as a host of minor characters including Mr. Gower.  When she smiles, Amanda Tanguay is Mary Bailey; when she purses her lips, she’s Mrs. Bailey, George’s mother.  Jarrod Zimmerman and James Joseph, Harry Bailey and Uncle Billy respectively, also play Ernie the cab driver and Bert, the cop.  Camille Robinson plays Violet Bick and George’s daughters, Janey and ZuZu, as well as singing the jingles in commercial breaks.

People from all across the country were in the audience for “It’s a Wonderful Life: Live in Chicago!”  There was even a group from Albania – and they wrote a “telegram” which the lucky cast member actually read out loud!  An additional treat, the cast members serve milk and cookies in the lobby after the show.

“It’s a Wonderful Life: Live in Chicago!” runs through December 27th at the Greenhouse Theatre Center, 2257 N. Lincoln Avenue, Chicago.  Performances are Thursday and Friday at 7:30 pm; Saturday at 4:30 and 7:30; and Sunday at 2:30.   Additional performances have been added on select times and dates.  Running time is 90 minutes, no intermission.  Tickets range from $19-$49.  Free parking is available at the former Children’s Memorial Hospital garage, 2316 N. Lincoln.  FYI (773) 404-7336 or www.americanbluestheater.com.