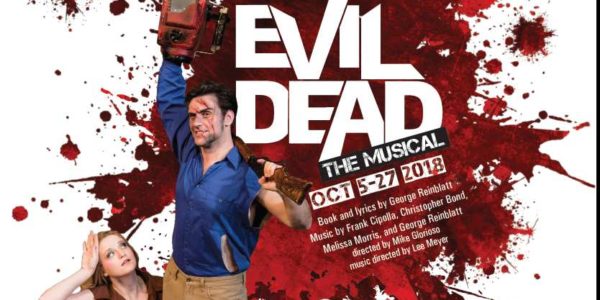 Valparaiso’s Chicago Street Theatre is no stranger to pushing the envelope when it comes to choosing material to fully engage their audiences. With a tradition of performing some monstrous works in their October slot, the theatre is making a huge splash this Halloween with the NWI premiere of EVIL DEAD: The Musical based on the over-the-top cult movie trilogy by Sam Raimi. Performances of the hysterical demon filled romp run October 5 through 27 at the theatre located at 154 W. Chicago Street. Directed by Michael Glorioso, the gory and song-filled tribute, complete with a “Splash Zone,” is lovingly adapted for the stage with book and lyrics by George Reinblatt and music by Reinblatt, Christopher Bond, Frank Cipolla, and Melissa Morris.

Horror movie fans will delighted by this faithful musical adaptation that tells the story of a group of college kids who go for a weekend’s stay at a cabin in the woods where they discover a supernatural book that unleashes numerous outlandish terrors complete with demonic possessions. When the original independent movie premiered in 1981, audiences quickly embraced Sam Raimi’s quirky humor and hyperkinetic brand of horror and it prompted sequels with Evil Dead 2 in 1987 and Army of Darkness over a decade later in 1992. The trilogy follows the story of Ash, a lowly S-Mart employee as he heroically battles the dark forces released by the Necronomicon in an adventure that is both horrific and “groovy.”

Hot off the success of Memorial Opera House’s production of Legally Blonde, Valparaiso’s Michael Glorioso was the perfect choice to direct the show. “Not only is Mike completely adept at directing musicals, he is a huge horror movie fan with a particular love for 80’s classics and grind house films,” said Tim Gleason who serves as Co-Chair of the Artistic Committee that select the shows each season at CST.

EVIL DEAD: The Musical gives the director who helmed the theatre’s production of Night of the Living Dead two years ago the chance to bring another one of his favorites to life. “When I found out there was a musical version of Evil Dead, I knew I had to direct it,” says Glorioso,” It’s more challenging than anything I’ve directed before because it has such iconic characters, over the top situations and fans like me who are totally obsessed with it. It creates a pressure to get everything right with the humor and the effects”

The rock musical was originally performed in 2003 at the Tranzac Club in Toronto and became an instant hit and eventually moved to New York for a long Off-Broadway run. The show has an abundance of laughs with song and dance numbers like “Cabin in the Woods” and “Look Who’s Evil Now,” that lampoon the genre horror films while paying homage to Raimi’s masterpieces at the same time.

Glorioso has assembled a top notch cast of local talent to both embody and disembody the roles fans of the movies know and love. The ensemble features Tyler Mills (Merrillville) as Ash; Lisa Zandy (Dyer) as Linda; Auriel Lark Felsecker (Miller) as Cheryl; Andrew Glorioso (Valparaiso) as Scotty; Samantha Bean (Hobart) and Bobbie Sue Kvachkoff (Crown Point) alternating in the role of Shelly; Amanda Elkins (Valparaiso) as Annie; Nate Hendricks (Valparaiso) as Ed and Judah McQueen (Valparaiso by way of L.A.) as Jake.

Tickets are $30 per person for the two front row VIP couches, $20 for Adults, and $17 for Students, Seniors, Military and Groups of ten or more. For EVIL DEAD: The Musical, the first three rows of the auditorium are designated as the audience “Splash Zone.” Disposable Ponchos and other keepsakes for the show will be made available in the lobby prior to show time. Tickets are available by calling the CST Box Office at 219-464-1636 X1 or online at ChicagoStreet.org. Box Office hours are Tuesday through Saturday, noon to 4PM and two hours prior to show times. This show is not recommended for audience members under 17 or more sensitive viewers due to language, gore and violence. At press time CST’s Annual Nightmare on Chicago Street Halloween Party Fundraiser with Special Guest Svengoolie on Saturday, October 13 is SOLD-OUT.

Audience members  joined the cast and the crew following the performance on Friday, October 5 for an Opening Night Party with light appetizers hosted by Main + Lincoln located at 210 E. Lincolnway in downtown Valparaiso. Audiences can also find out what went into making the show with the cast and crew after the 7:30 PM performance on October 11 during the theatre’s popular Thursday Talkback edition.

Next Up for the theatre will be the holiday classic: A Charlie Brown Christmas running November 23 through December 16. Chicago Street Theatre hopes that audiences will take advantage of all the Halloween fun planned this season when EVIL DEAD: The Musical makes its NWI debut at CST!