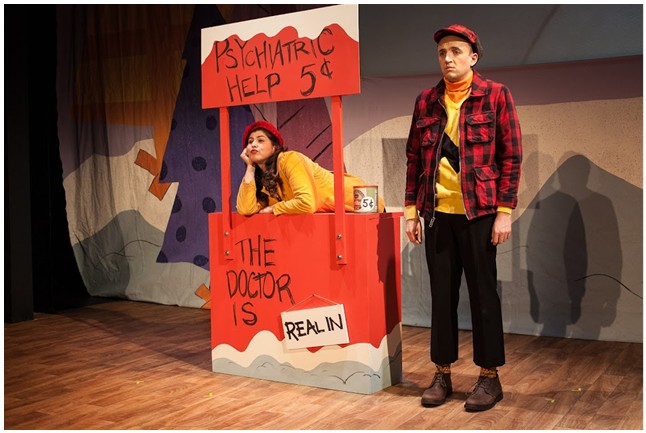 For parents who might arrive a little early, there are child-sized tables set up in the lobby with coloring supplies.  Inside the theater, original holiday-related Peanuts strips are projected while Christmas carols are playing.  Molly enjoyed reading the captions.

Emerald City’s adaptations are usually true to the source, and “A Charlie Brown Christmas” is no exception.  With the original dialogue and jazz music, it was like watching the television special brought to life.

Musical accompaniment was provided by Pig Pen (Kurysz) on drums, Schroeder (Benjamin) on piano and Peppermint Patty (Sandej-Schmidt) on bass.

After the play concluded, the cast scattered throughout the theater to encourage everyone in the audience to sing a round of Christmas songs, accompanied by some chair dancing.  Most were available in the lobby for autographs and pictures.  If you’re interested in a souvenir, plenty of things are on sale.  Molly chose a CD of the music from “A Charlie Brown Christmas”.  She said her Dad would love it!

“A Charlie Brown Christmas” runs through January 3rd at the Broadway Playhouse at Water Tower Place, 175 E. Chestnut, Chicago.  Performances are Saturdays and Sundays at 10:00 am; see www.broadwayinchicago.com for additional dates.  Running time is about an hour.  Tickets range from $16-$30.  Parking at a reduced rate is available in the Water Tower Place garage.  Get a validation card from any usher.  FYI (800) 775-2000, www.ticketmaster.com or www.broadwayinchicago.com.