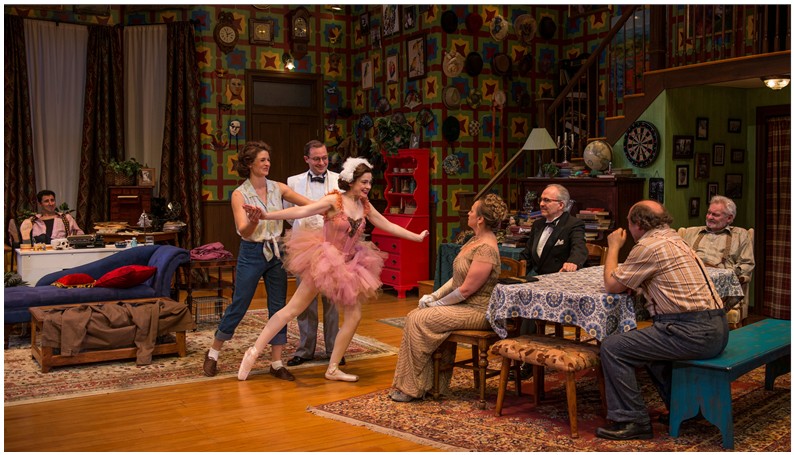 Eccentrics delight in “You Can’t Take It With You”

Considering that “You Can’t Take It With You” was written in 1936, in the middle of the Depression, it’s remarkably timeless.  The Sycamores are delightful in their eccentricities.  They know all too well that times are tough, but they’re not letting the Depression get them down.  Think about it, wouldn’t you love to live your dream – whether you’re good at it or not?  And who wouldn’t love to ignore the IRS?

Paul (Brad Armacost) and Penny Sycamore (Penny Slusher) live with their extended family – and a few strays – in a big old, slightly shabby house.  Penny, who used to paint (very badly), writes melodramatic plays which she never quite finishes.  Paul and his assistant Mr. De Pinna (Keith Neagle), who used to be their iceman until he moved in, make and test fireworks in the basement.

Rheba (Ericka Ratcliffe) is their live-in maid/cook, although she doesn’t seem to do a lot of cooking since the Sycamore diet seems to consist mainly of cereal, tomatoes and watermelon.  Her boyfriend, Donald (Samuel Roberson), who gets government money because he has a bad leg, sometimes does odd jobs for the family.

Penny’s father, Martin Vanderhof (John Judd), who goes to commencements for fun, quit his business years previously because he wasn’t happy.  He tells the family they should never do anything that they’re not going to enjoy doing.  Grandpa doesn’t pay income tax because he doesn’t believe in it.

One day Alice announces that she has a date with Tony Kirby (Bernie Balbot), her boss’s son.  Everyone is excited to meet him, so when the doorbell rings, they welcome the man standing there assuming he’s Tony.  Actually, he’s Wilbur Henderson (Tom Hickey), an IRS agent investigating Grandpa.

Alice invites Tony’s parents, Anthony (Patrick Clear) and Miriam Kirby (Jenny Avery) over dinner, but they arrive a day early, catching the family at their normal activities, which leads to chaos and catastrophe.

Everyone in the cast was amazing, but I need to mention Hollis Resnick who plays a drunken actress, Gay Wellington, in the first act, and the Grand Duchess Olga Katrina in the second.  Neither is a big part, but both are totally plummy!  She plays a drunk better than anyone I know, except maybe Dale Benson.

I had an interesting conversation with Sean Fortunato about his part.  He told me he heard about the part and was delighted to read for it because he knew he could do a lot with it – and he does!