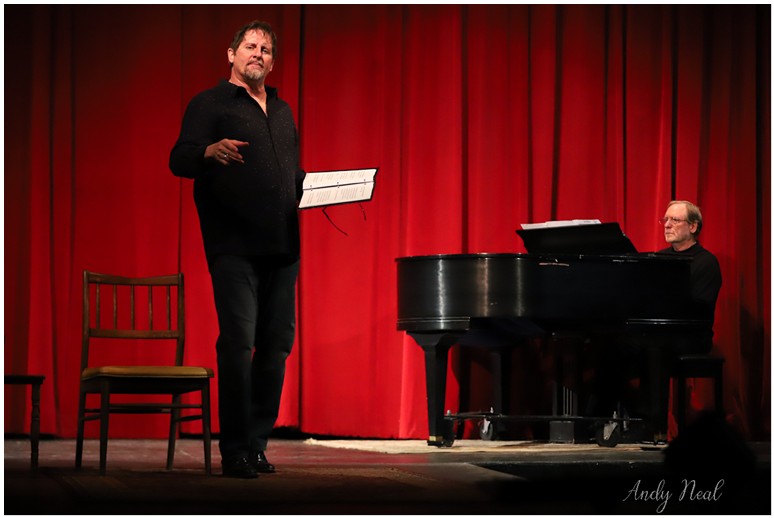 **** Recommended **** A good storyteller can hold the attention of his/her audience whether the story is simple or complicated, short or really, really long. Sometimes he/she even acts out the characters in the story. Jeffrey Baumgartner is a very good Storyteller in Dunes Summer Theatre’s final production of the 2018 season, “After Paul McCartney”, an amusing story about two friends on a crazy quest. I really enjoyed this show. 3 ½ Spotlights

A lounge-singer who calls himself “the master of the Lennon-McCartney songbook” is positive Paul McCartney has lost his song-writing chops because he broke up with John Lennon. He’s equally positive that he can help, he just needs to sit down with Paul, so he decides to go to England and look for him. His best friend decides to go with him. By the way, he must have a REALLY tolerant wife, since she didn’t ask relevant questions like how much will this cost and how long will you be gone?

In London, the guys go to McCartney’s house, only to learn that he’s not there. Figuring out vague hints and clues, they hurry to London, to Scotland and beyond. Vivid descriptions of all this traveling hither and yon makes up a good bit of the story. Mention of a particularly tiny hotel room in London transported me to a similarly tiny room I had in a hotel on Rue Pigalle in Paris. I’m positive I’ve ridden in the same compartment on the same British Rail train to Scotland.

As we talked about the story on the way home, my friend Susan noted that there didn’t seem to be a lot of planning involved in their search. I think it’s a guy. They get an idea and they have to follow through – even if it’s a futile trip to the other side of the world!

When he was growing up, Indianapolis-based playwright David Hoppe, spent a lot of time at his family’s vacation home in Michigan City, so he was tickled to spend some time at DST working with Director John Green and DST Artistic Director/Actor Jeffrey Baumgartner. Coincidentally, a 30-minute play about the preservationists who saved the dunes, has its debut this weekend (September 24th and 25th) at the Dunes Blowout: A Festival of Performance & Ecology at the National Lakeshore’s West Beach in Chesterton.