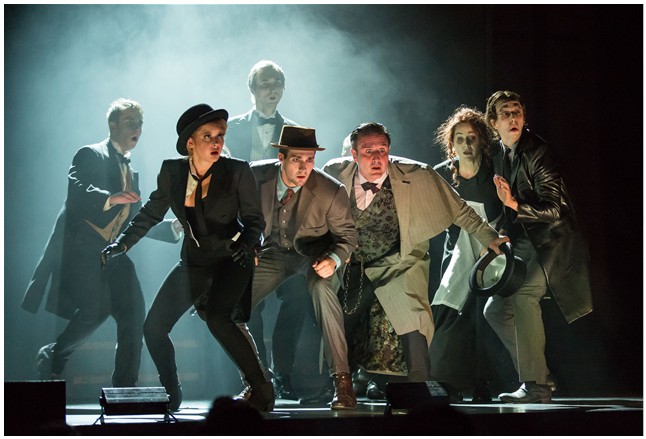 Don’t Waste Your Money on “Sherlock Holmes” at the Oriental

*  Not Recommended *  As I watched “Sherlock Holmes” the other night, I caught myself zoning out, thinking about anything but the play I was watching, and wishing I was somewhere else.  I love a good mystery, but “Sherlock Holmes” didn’t cut it.  Even the star power wasn’t enough to save it.  “Sherlock Holmes” is just a really bad play, and I give it 1 Spotlight.

The problem is that this play didn’t know what it wanted to be – drama, comedy or cartoonish melodrama.  It couldn’t even be campy!  This Sherlock Holmes (David Arquette) isn’t portrayed as a brilliant but flawed detective, but as a silly, posturing braggart.  He even giggles as he expounds on his brilliance.  Mrs. Hudson (Barbara Gordon) seems smarter!

Dr. John Watson (James Maslow), first introduced as Holmes housemate, is at first skeptical of Holmes’ claims, but he’s still willing to follow him around London.

Colonel Sebastian Moran (Graham Cuthbertson) is the villain – at least he’s on the scene of most of the crimes – but he may or may not be working for Professor Moriarity (Kyle Gatehouse), Holmes’ nemesis and his mysterious female companion, Orchid (Ana Parsons).

When a murder is committed near the river, Inspector George Lestrade (Patrick Costello) brings the case to Holmes for a consultation.  In the meantime, Lady Irene St. John (Renee Olstead) – pronounced Sin Jin – who witnessed her husband’s kidnapping, has asked for Holmes’ help.  Holmes says no, but after he sees the kidnap location, he announces that the two cases are connected.

My guest Cindy, who used to live in the U.K., said the British accents were atrocious.  Some of the actors, Arquette in particular, didn’t even bother.  And why did Renee Olstead, whose character was supposed to be American, have a bad British accent?  Speaking of Olstead, she never spoke her lines, she shrieked them.  She also spoke so fast, it was impossible to understand what she was saying.

I read that this adaptation premiered in Montreal and was a critically acclaimed hit.  It even won some awards, but I can’t imagine why.

“Sherlock Holmes” runs through November 29th at the Oriental Theatre, 24 W. Randolph, Chicago.  A list of the remaining performances can be found at www.broadwayinchicgo.com.  Running time 2 hours, 30 minutes with an intermission.  Tickets range from $21-$87.  FYI (312) 977-1710, www.sherlockholmesonstage.com or www.broadwayinchicago.com.