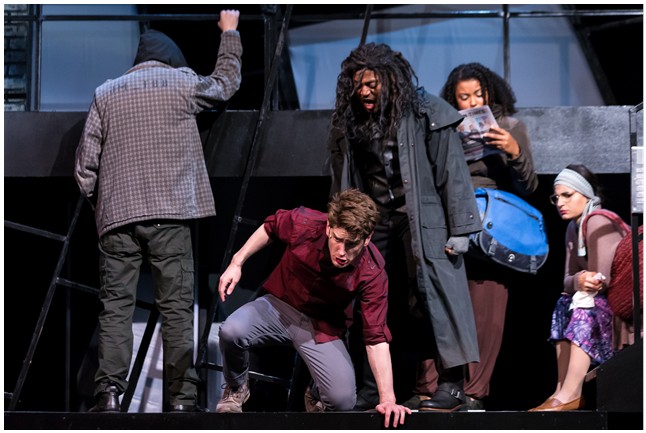 **** Highly Recommended **** “Ghost: The Musical” (based on the 1990 move) is an intimate love story – which just happens to have some supernatural elements. It’s not a ‘big’ story, so it doesn’t need a ‘cast of thousands’ in glitzy costumes on a huge stage. Director Linda Fortunato wisely left the story to stand for itself – and the results are outstanding! Just a hint, you’ll want to have extra tissues in your purse/pocket, you’ll need them. Theatre at the Center’s intimate space is the perfect venue for “Ghost”. 4 BIG Spotlights

Sam (Garrett Lutz), a banker and Molly (Courtney Mack), an artist, just made a huge commitment, buying a loft together. Carl (Tony Carter), Sam’s friend and co-worker, has been helping them move. When they’re finally alone, Sam shows his love for Molly by singing the show’s signature song, “Unchained Melody”.

At work on Monday, Sam is going into a meeting so he gives Carl his user codes so he can take care of a customer account. While he’s alone, Carl gets creative, moving a mob boss’s money into a pass-protected account. Later that day, when he tries to move the money into an offshore account, his access is denied. When he finds out that Sam changed the codes, he’s frantic to get them.

That night, on the way home, Sam is murdered in a botched mugging. Leaving his body lying on the pavement, he follows the mugger home, getting attacked by a subway ghost (Travis Austin Wright) on the way. When he hears Willie (Carlos Olmedo), the mugger, on the phone with Carl, he knows he was set up. Back at the loft, he watches Carl move in on the devastated Molly and tries to stop him, but he can’t do anything.

Wandering around New York, he sees a sign for a psychic who can speak with the dead, so he stops in. As Mrs. Santiago (Christie Coran) waits, Clara (Jackie Gessert) and Louise (Qiana McNary), sing “Are You a Believer?” Psychic Oda Mae (Donica Lynn) is completely over-the-top, from her gold lame cape to her blue lipstick, especially when she really hears a ghost! When Sam learns that Oda Mae can really hear him, he decides to use her to save Molly.

Courtney Mack had everyone in the audience blotting a tear or three as the grieving and vulnerable Molly. The chemistry between Mack and co-star Garrett Lutz is off the charts. Lutz made me a believer as he tried to navigate between two different realities. Although the costumes were over the top – you have to see Oda Mae’s hot pink suit with matching bag, shoes and church hat to believe it – Donica Lynn’s portrayal of the hysterical Oda Mae was uniquely her own. Although Carl is clearly the villain of the story, Tony Carter gave him a kinder side.

The ensemble is loaded with talent, too. Between them, Christie Coran, Jackie Gessert, Qiana McNary, Carlos Olmedo, Kelvin Roston, Jr. and Travis Austin Wright play at least 14 characters, giving each – even the tiny bit parts – a unique identity.

By the way, speaking of Jackie Gessert, I remember when she had a non-speaking part in a TATC production of “A Christmas Story”. Her father, my friend Chuck Gessert, proudly told me that, during that run, she told him she needed to get an agent. Jackie grew up here in Munster, so I’m delighted she’s back in town.

The score, lyrics by Bruce Joel Rubin, music and lyrics by Dave Stewart and Glen Ballard, doesn’t have a huge blockbuster hit song, but there’s “Unchained Melody”, the Righteous Brothers hit which made the movie memorable. TATC Musical Director William Underwood and the orchestra, provide a pleasing musical experience for all.

TATC’s technical crew did a fabulous job staging “Ghost”. The vaguely industrial, multi-level set designed by Sarah Ross provides a versatile backdrop for locations as diverse as a studio-loft, a Wall Street bank, a New York subway, and a Brooklyn psychic’s storefront. Guy Rhodes’ lighting can be intimate, business-like or sinister. Brenda Winstead’s costumes are exactly right for the characters. Kudos to Fight Choreographer Jason Kaplan for the realistic fight sequences.