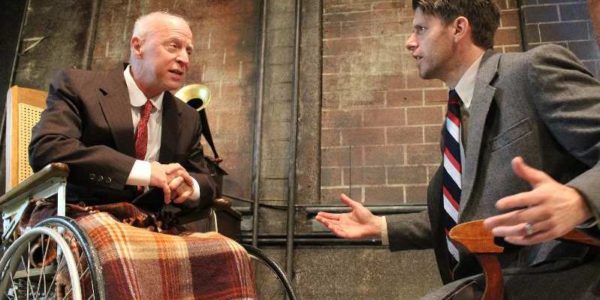 In celebration of their 20th anniversary on Chicago Street Theatre, CST is proud to bring audiences the holiday favorite, It’s a Wonderful Life to their stage November 24 through December 16, 2017.  Based on Frank Capra’s 1946 movie classic featuring Jimmy Stewart and Donna Reed, the play follows the life of George Bailey- a small town man with big dreams. In addition to the movie’s memorable performances from Reed, Stewart, and the great Lionel Barrymore as Mr. Potter, the film also featured the work of Valparaiso native Beulah Bondi in the role of George’s mother.

It’s a Wonderful Life first premiered at Chicago Street Theatre in November and December of 1998 with Dona Henry and Kelly Hite directing. Since that time, Henry and her niece have directed the play all five times the theatre has produced the work both as a traditional telling of the story and as a radio play. The pair are Wonderful Life fanatics who want to share the show’s message about what it is to have a meaningful life with audiences of all ages. Along with depicting the small town tale of community and friendship, the directors have always infused each production with a sense of family.

Tickets for the production are available through the CST Box Office and online at ChicagoStreet.org Prices are $30 per person for front row VIP couch seating up to four; $20 for Adults; and $17 for Students, Seniors, Military, and Groups of Ten or more. Audiences can save for larger groups by purchasing CST’s Family Pass for $120 that can accommodate 12 people for It’s a Wonderful Life and the theatre’s March production of Sideways Stories from Wayside School. Box Office hours are Noon to 4PM, Tuesday through Saturday and two hours prior to performances. Audiences are invited to join the cast and crew for an Opening Night After Party hosted by Pestos Italian Restaurant located at 3123 Calumet Avenue in Valparaiso.

Chicago Street Theatre invites people to share the gift of live theatre this season and begin a holiday tradition when they present It’s a Wonderful Life– November 24 through December 16 at 154 W. Chicago Street in beautiful downtown Valparaiso.