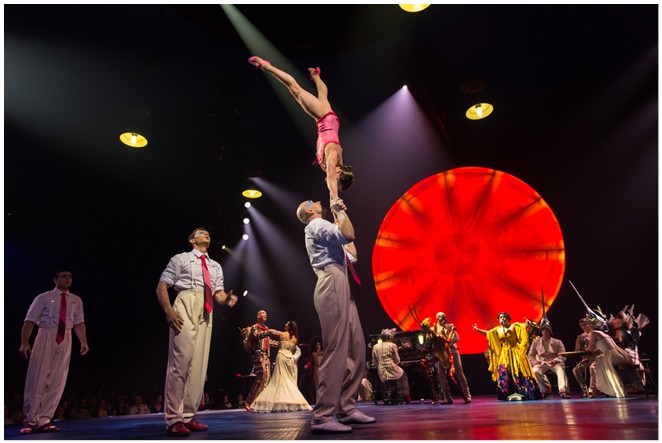 **** Highly Recommended **** Cirque du Soleil’s newest production, “Luzia: A Waking Dream of Mexico” is truly spectacular.  If you’ve never seen a Cirque show, you will think it’s amazing.  On the other hand, to a Cirque devotee, which I am, it’s a tad disappointing.  Cirque’s customary colorful costumes, masks and scenery are here, as well as the musical background.  Although more circus than Cirque, “Luzia” is still awesome.  4 Spotlights

“Luzia” celebrates the customs, colors and scenery with a conglomeration of acts popular in Mexico. A great disk, which can represent the sun, the moon or the Aztec calendar, hangs over the set. There’s a singer as well as a band, which plays the music of Mexico.

The show begins with a clown parachuting to the ground, flipping and turning in the air, even dropping his backpack. He appears throughout the show, looking for water, using a beach ball and a whistle to interact with the audience, even scuba diving with three not-so-friendly cacti.

A girl with huge butterfly wings and a giant horse (puppet) waken the people of Mexico. She’s followed by a troop of hoop divers wearing vibrant red hummingbird wings. Their act is performed on a giant treadmill which sometimes goes in two different directions. The hummingbirds are followed by an adagio – three porters “flinging” a female flyer above their heads where she does amazingly intricate flips.

The next act features two women, one in the air and one in a Cyr Wheel on the ground. Suddenly, the act leaps from ordinary circus act into the truly spectacular when the performers start spinning through a waterfall! Yes, it’s real water falling in a narrow curtain, stretching across the entire stage. The performers get wet, but the floor stays dry!

The “rain curtain” is a marvel of engineering. The water starts and stops on an instant. At one point, it’s falling in a stencil-like pattern with flowers, vines, leaves, animals and abstracts! How did they do that? The Cirque press release calls it a graphical water display screen. By the way, the water is filtered, disinfected and maintained at a constant temperature of 82°F (28°C). 1585 gallons (6,000 litres) of water will be recycled for Cirque’s entire stay in Chicago.

Other acts:
• Hand balancing – an expert gymnast demonstrates his upper body strength by doing the iron cross and other feats while balancing on two very high poles
• Football dance – a guy and a girl do multiple tricks with a soccer ball
• Aerialists on poles – fling each other back and forth between poles
• Swing 360 – hoop diving
• Aerial straps – a man does tricks while flicking his hands, feet and long hair in and out of a pool of water while a giant panther (puppet) walks below
• A speed juggler – started with three clubs, held up an hand to catch a club dropped from above, repeated until he was speed juggling seven clubs. Opening night, he actually missed a club on his last trick, slid across the stage into the audience, ran back and did it all again!
• A contortionist

“Luzia” runs through September 3rd under the Grand Chapiteau, United Center, Parking Lot K, Chicago. Running time is 2 hours, 5 minutes, with a 25-minute intermission. Performances are Tuesday through Thursday at 8:00 pm; Friday and Saturday at 4:30 and 8:00 pm; Sunday at 1:30 and 5:00 pm.

Tickets range from $35-$113; Premium Seating ranges from $140-$150. The VIP Rouge package which includes a Premium ticket, a cocktail reception with open bar and hors d’oeuvres before the show and during intermission, access to private restrooms and terrace, complimentary parking where available and more, ranges from $265-$275. Parking at United Center is expensive. We paid $25 for the lot at Damen & Adams. If you can, take public transportation. FYI www.cirquedusoleil.com/luzia.