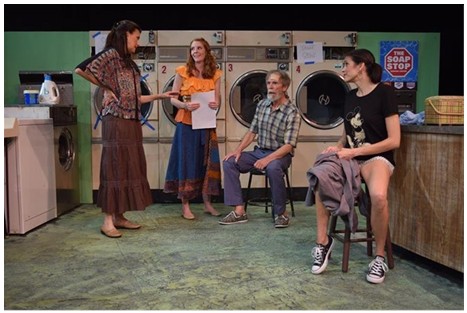 **** Recommended **** You don’t want to miss Chicago Street Theatre’s world premiere production of “Wash, Dry, Fold”.  What makes family?  “Wash, Dry, Fold”, a poignant little play with an unexpected twist, has a lot to say about family and the ties that bind.  Don’t miss this, I give it 4 Spotlights.

Chicago Street Theatre is one of just seven theatres in the country selected to debut the winners of the American Association of Community Theatre (AACT) New Play Fest.  Jim Henry, resident playwright at Chicago Street Theatre and member of the Chicago Dramatists, was a winner in 2012 with his play “Jellofish” (produced locally by Genesius Guild).  Nedra Pezold Roberts, who wrote “Wash, Dry, Fold”, was also a winner in 2012, with “The Vanishing Point”.

On opening night, Jim Henry explained the New Play Fest, and introduced AACT Executive Director, Julie Crawford.  He also introduced Linda Lee (my apologies if I got her name wrong), representing the Jack K. Ayre Frank Ayre Lee Theatre Foundation, who presented CST with a check for  $4000 toward the costs of this production.

“Wash, Dry, Fold” is set in Grace’s Place, a run-down laundromat in a seedy neighborhood in New Orleans.

Sassy, snarky Trudy (Mary DeBoer), signed her share of Grace’s Place over to her sister, Enola (Barbara Malangoni), when she went to prison for manslaughter.  She shot her husband after he took a baseball bat to her ribs.  Enola only visited her once while she was serving her time.  Now that she’s out of prison, she works for Enola while not quite passive-aggressively resenting her.  Trudy dresses younger than her age.

Enola, on the other hand, is buttoned up, tense and bossy.  She’s forever correcting Trudy, bringing up everything she ever did wrong (including childhood wrongs) whenever they have a disagreement.  She’s worried about the business, but she won’t share her concerns with her sister, whom she considers flighty.  She wears loose, unflattering old-lady dresses.

Their Uncle Slack (Ed Hubbard) was a POW for three years in Vietnam, and he’s never really recovered.  He likes to walk up to the bank’s drive-up window, where he passes a robbery note to the teller, who then gives him enough money to buy one beer.  Every week Trudy gives the teller enough money to cover the week’s robberies.  Now she’s pissed off because a baby-faced rookie policeman gave Uncle Slack two tickets for walking up to the drive-up window.  Uncle Slack has a magic touch with old, worn-out washers and dryers.

Arlene (Caity Mullen) quit her job at an art gallery in Florida and moved to New Orleans after her parents died.  After she took a job as an artist in a tattoo parlor a couple of doors from Grace’s Place, she got to know Trudy and Uncle Slack, who she likes a lot.  She’s not so sure about Enola.  Arlene has her own unique, funky style sense.

Mick (David Pera) is Arlene’s lawyer, and he’s very protective of her.  Mick is also Uncle Slack’s pro bono lawyer, watching out for him.  Mick is outraged when he learns that Enola plans to have Uncle Slack committed.