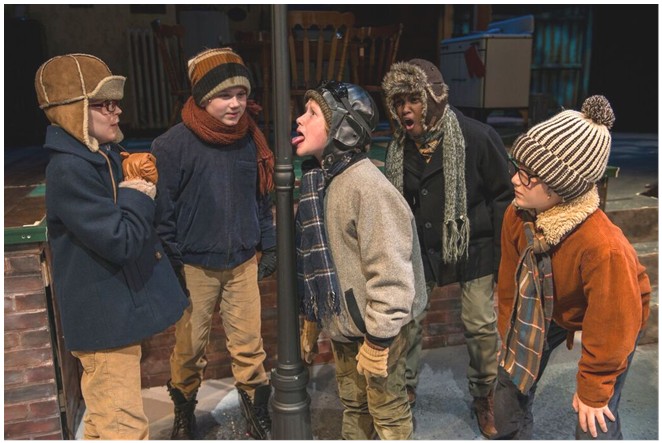 Charming Production of “A Christmas Story” at Theatre at the Center

**** Recommended **** Every family has their own holiday traditions.  In my family it was “A Christmas Story”.  For some reason, that was my children’s favorite Christmas movie.  More recently, it’s become one of my favorite plays.  Ralphie, Randy, Flick and the gang are back, in Theatre at the Center’s charming production.  No matter how many times I see this nostalgic story, I always laugh!  I give “A Christmas Story” 4 Spotlights.

“A Christmas Story” has a special connection to Theatre at the Center –  location, location, location!  In case you didn’t know, Ralphie’s home town, Hohman, is actually Hammond, the city just north of TATC.  In fact, playwright Jean Shepherd grew up in my old neighborhood, Hessville.  My dad, Bill Lannin, actually knew these guys (Flick and Schwartz were real people), lived on Cleveland Street, and went to Warren G. Harding School with them.

“A Christmas Story” is narrated by a grown-up Ralph, played by the very talented Rod Thomas.  As Ralph reminisces, the audience meets his family.  Although this is a child’s story, his love for his family comes through loud and clear.

Mother (Linda Gillum), is always there, taking care of the family, deferring to The Old Man (John Lister), and unflappable in the face of calamity.  The Old Man is larger than life, with his colorful vocabulary – especially when he’s offstage dealing with clunkers in the coal-burning furnace or the Bumpuses’ dogs.  Winning a ‘major award’ in a contest is a thrill!

Ralphie doesn’t pay much attention to his younger brother Randy (Nolan Moss), who rarely eats. Ralphie and his friends, Schwartz (Rowan Moxley) and Flick (Charlie Iverson), like boys everywhere, were always on the alert for the neighborhood bully, Scut Farkas (A.J. Anderson).    They didn’t have much time for girls, although Esther Jane (Hannah Clare Horner) was pretty interested in him.  Helen (Ellie Evans) was the smartest kid in Miss Shield’s (Susan Gosdick) class.

It’s getting close to Christmas, and Ralphie (Nate Becker) is on a mission.  He wants a genuine Red Ryder Carbine Action 200-shot Range Model air rifle with a compass and this thing that tells time in the stock.  Unfortunately, everyone from Mother to Santa to Esther Jane warns him that he’ll shoot his eye out!

Just like “you’ll shoot your eye out”, there are certain recurring phrases in “A Christmas Story” which, even out of context, always make me laugh – things like “meat loaf and red cabbage”, “fra-gi-li” and “I Triple-Dog Dare You”.

Opening night, Hammond’s mayor, Thomas McDermott, Jr., welcomed the audience to northwest Indiana’s hometown play and announced that Ralphie will be the grand marshall in Hammond’s Christmas parade.  He also recommended a visit to the Indiana Welcome Center for “A Christmas Story” Comes Home, featuring window displays from Macy’s.

“A Christmas Story” runs through December 27th at Theatre at the Center, 1040 Ridge Road, Munster.  Performances are Wednesdays and Thursdays at 2:00 pm; Fridays and Saturdays at 8:00; Sundays at 2:30; and select Thursday and Sunday evenings and Saturday matinees.  Running time is 2 hours, 15 minutes with an intermission.  Tickets range from $40-$44.  Parking is free.  FYI (219) 836-3255 or www.theatreatthecenter.com.