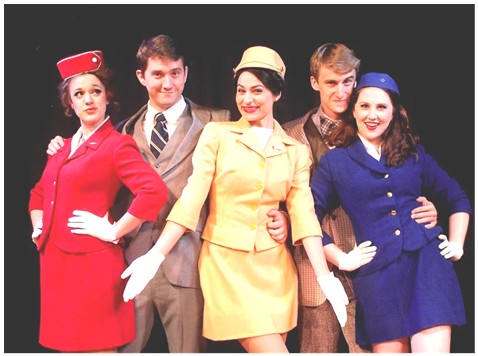 **** Recommended **** Canterbury Summer Theatre opened their 48th season with “Boeing Boeing”, a delightfully snarky comedy set in the swinging sixties.  The talented cast got the audience laughing early on and kept them laughing right to the end.  “Boeing Boeing” made me laugh, too, so I give it 4 Spotlights.

The premise of “Boeing Boeing” is simple but improbable – one guy, three fiancées – but then improbable situations are the bread and butter of farces.  Another requirement for a successful farce are doors, lots of doors.  I think I counted at least eight on the Canterbury set.  Those doors, split-second timing and very fast talking are the key elements in keeping those fiancées apart.

Bernard (Ernest Roberts) has what he considers to be the perfect life.  He has a job he loves, he lives in a spacious flat in Paris, and he has with three gorgeous fiancées!   His housekeeper, Berthe (Clara Flaherty), who has some of the snarkiest lines in the comedy, rather grudgingly helps him keep his schedule.

Fiancée #1, American Gloria (Kara Zediker), is an air hostess (flight attendant in today’s parlance) for TWA.  Her bright red TWA flight bag matches her a red uniform and hat.  Around the apartment, she wears red lingerie.  As she’s getting ready to leave for the airport, she mentions that she’s switching to a new plane, Boeing’s new streamliner.

Meanwhile, Robert (Jesse Kortus), surprises his college friend Bernard when he rings the doorbell with luggage in hand.  Nerdy, shy Robert is from Wisconsin, he’s never done anything in his life, and he desperately wants to meet someone special.  Robert is in Paris on his way to visit relatives in Aix en Provence, so of course, Bernard invites him to stay.

After Gloria leaves, Bernard tells Robert about his perfect life.  He explains that he has three fiancées; that they are all air hostesses; that they are all from different countries; that they all fly for different airlines; their names all start with the letter “G”, Gloria, Gabriella and Gretchen; and that their schedules are precisely coordinated.  Robert is fascinated with, and envious of his friend’s life, so he decides to stay for a few days.

Fiancée #2, Gabriella (Rachel Paul), is scheduled to be at the flat for lunch before she flies out.  When she arrives, wearing her blue Alitalia uniform with a matching blue flight bag, Berthe has prepared Italian food for lunch.  Gabriella mentions in passing that the airline has purchased several of Boeing’s new faster plane.  Shortly after lunch, Bernard takes her to the airport.

When fiancée #3, Gretchen (Christie Coran) she arrives, Robert is lying on the chaise with a towel over his face.  Thinking it’s Bernard, she runs over and gives him a big kiss.  Upset over her mistake, Gretchen goes into ‘their’ bedroom for a rest.  When Gabriella returns unexpectedly, Robert covers.

Bernard is shocked to see Gabriella when he gets home.  Robert blocks the door to the bedroom while encouraging him to take Gabriella to the country for dinner.  Of course he doesn’t pick up on the hints Robert has been dropping, so he’s blindsided when Gretchen comes out of the bedroom.

Meanwhile, Gloria calls and says her flight turned back due to a storm over the Atlantic.  Suddenly, due to weather and new, faster airplanes, Bernard’s life has gotten really bumpy.  Is it a coincidence that all three fiancées are in the flat at the same time?

Canterbury Summer Theatre in Michigan City maintains a longstanding tradition in American theater, summer stock.  From Memorial Day to Labor Day each year, rustic playhouses would entertain “city folk” partaking of country life.  Many actors got their first break by auditioning for a place in a resident summer stock company, whose stock in trade is repertory – the same actors in different roles in 4 or 5 plays in quick succession.

Over the course of their previous 47 (I’ve been reviewing them for 12) seasons, Canterbury Summer Theatre has had some exceptionally talented people in the resident cast.  For instance, TV & film star Annie Potts (1973 season) married her first husband in the theater; Judith Ivey (also 1973) went on to win Tony awards for “Steaming” and “Hurlyburly”; Randal Keith (1985 & 86) played the Phantom in “The Phantom of the Opera” and Jean Valjean in “Les Miserables”; Jennifer Farrell (1993) went on to host A & E’s “Find & Design”.  Well-known Chicago actor Gene Weygandt is a Canterbury alum.

Kudos to Artistic Director Ray Scott Crawford) and Associate Artistic Director (David Graham).  They have once again recruited top-notch talent, artistic staff, actors and crew, from across the country (nine states, this year.

“Boeing Boeing” runs through June 18th.  Next up, “The Marvelous Wondrettes” June 22nd through July 2nd.  The season will continue with “First Date”, July 6th through 16th; “Tenderly”, July 20th through 30th; and “Parallel Lives” August 4th through 6th.  Performances are scheduled on Wednesdays and Thursdays at 2:00 pm; Fridays at 8:00 pm; and Saturdays at 6:30 pm.  Tickets are $15 for matinees, $16 for evenings.