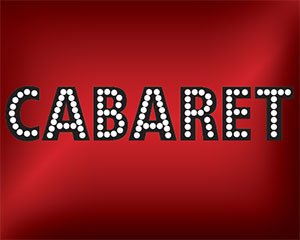 – Cabaret, one of the great Broadway musicals of all time, begins previews at Theatre at the Center (TATC) in Munster on May 4 and opens on May 7 for a run that continues through June 4.   Winner of eight Tony Awards, including Best Musical and Best Original Score, this theatrical masterpiece welcomes theatergoers to the Kit Kat Klub in 1930s Berlin, where a mischievous Emcee invites everyone to join cabaret singer Sally Bowles and Cliff Bradshaw, an American writer searching for inspiration, in a world on the brink.   This timeless classic features iconic songs such as “Maybe This Time,” “The Money Song,” “Willkommen” and “Cabaret.”

The cast includes Danni Smith, who recently wrapped up the run of Mamma Mia at Marriott Theatre.  Other Chicago credits include A Christmas Story: The Musical at Paramount Theatre and Chess at Porchlight.   Danni has received four Jefferson Awards and is co-founder of Firebrand Theatre, a musical theatre company committed to empowering women.   Patrick Tierney is cast in the role of Cliff.   He was recently seen at TATC as Prince Herbert in Spamalot.   His other credits include Young Frankenstein at Metropolis and Les Mis at Paramount Theatre.   Sean Fortunato returns to TATC in the role of the Emcee and recently appeared as Lancelot in Spamalot.   His other roles include Book of Joseph at Chicago Shakespeare and 2666 at Goodman Theatre.   Sean has received five Jefferson nominations and an After Dark Award.

Additional cast members include Craig Spidle in the role of Herr Schultz.   Craig’s Chicago credits include The Tempest at Steppenwolf and Sweet Bird of Youth at the Goodman Theatre.   He has also appeared Off-Broadway at the Cherry Lane Theatre and in numerous television productions including Chicago P.D..   His film work includes Road to Perdition and The Color of Money.   Iris Lieberman returns to TATC as Fraulein Schneider.   Iris was recently seen at TATC in Annie Warbucks and returns directly from appearing as Mrs. Potts in Beauty and the Beast at Fireside Theatre in Wisconsin.

Linda Fortunato is Artistic Director of Theatre at the Center and Director and Choreographer of Cabaret. Linda has been nominated for five Jeff Awards for her work as a choreographer and director.   She received both the Equity and Non-Equity Jeff Awards for Outstanding Choreography in the 2013-2014 season, garnering TATC’s first award for her choreography of 42nd Street.   Linda has been involved with over a dozen shows at TATC, directing Annie Warbucks and A Christmas Story, and choreographing Spamalot, Big Fish, A Christmas Carol, Guys and Dolls, Crazy for You and Fiddler on the Roof.

“Cabaret continues to attract both new audiences and return visitors more than fifty years after its initial Broadway production, because it has everything –fascinating characters, iconic music, a dazzling look that transports us to a different world that is still incredibly timely and relevant today” according to artistic director Linda Fortunato.   “It’s an incredibly engaging and entertaining piece.”

The 1966 Broadway production of Cabaret (Book by Joe Masteroff, Music by John Kander and Lyrics by Fred Ebb) is based on John Von Druten’s 1951 play I Am a Camera, which was adapted from Christopher Isherwood’s short novel Goodbye to Berlin (1939).   The Broadway production became a hit film in 1972.   Set in 1930 Berlin as the Nazis are rising to power, it is based on nightlife at the Kit Kat Club and revolves around an American writer, Cliff Bradshaw, and his relationship with cabaret performer Sally Bowles.

Performances are 2 p.m. Wednesdays and Thursdays, 7:30 p.m. Fridays and Saturdays; 2:30 p.m. Sunday, and select Thursday and Sunday evenings and Saturday matinees.   Individual ticket prices range from $40 – $44.   To purchase individual tickets, call the Box Office at 219-836-3255 or Tickets.com at 800-511-1552.   Group discounts are available for groups of 11 or more and gift certificates are also available.   For more information on Theatre at the Center, visit www.TheatreAtTheCenter.com.