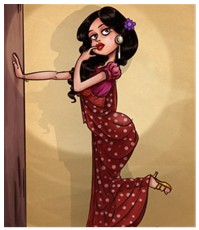 I really enjoyed the Beatniks’ production of “Communicating Doors”, a time-traveling comedy/murder mystery with a rather complicated plot. people are jumping through time – but the talented cast handled it well – and with credible British accents! 3 Spotlights

As soon as Julian left the room, Reece told Poopay (whose name was really Phoebe) that he wanted her to sign and witness a document. When she refused, he told her that the letter told the truth about his partner, Julian. It explained how/why Julian murdered Reece’s first wife, Jessica, and his second wife, Ruella.

Poopay signed the letter, hid it in the toilet tank, and Reece went to bed. Before she could leave, however, Julian came back and tried to kill her. When he blocked the door, she hid in a storage room/closet – but it was a very strange closet.

When she thought she might be safe, she opened the door, but the room was occupied by a woman called Ruella (Julie Breford) who screamed and called security – and it was 1994! Poopay, who admitted her name was Phoebe, was able to to make Ruella understand – by sharing factoids she’d learned from Reece – that Julian was planning to murder her and that he’d also murdered Reece’s first wife, Jessica.

When Ruella went into the closet, she walked out into the same room – in 1974. She found Reece and Jessica celebrating their honeymoon. A brand new security guard, Harold (Tony Herman), escorted Ruella out, but she came back to talk to Jessica, who wouldn’t believe a word she said. Ruella wrote Jessica a note to be opened on a certain date and ducked back into the closet.

Although “Communicating Doors” sounds serious, it’s really quite funny. In fact, there is an absolutely hysterical slapstick scene around a window.