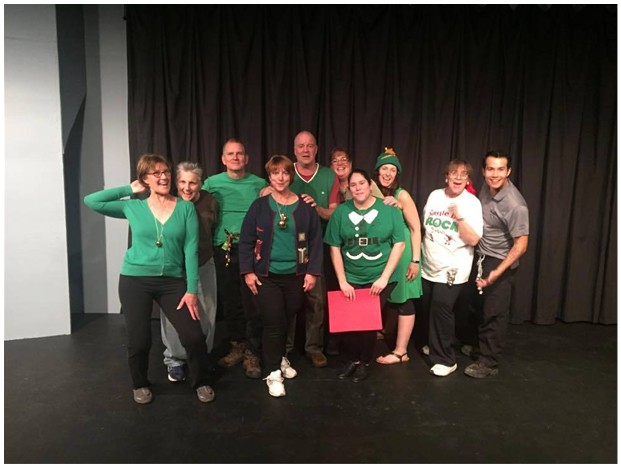 Over the weekend, I had a rare evening off, so I decided to catch Beatniks Babes and Boys, a very funny comedy/variety show and fundraiser for Beatniks on Conkey, home to Beatniks Productions and Hammond Community Theatre. Shows will be held Nov. 30th, Dec 1st and Dec. 2nd. 2018.

Rip & Bonnie Johnson, owners of Beatniks on Conkey, who graciously interacted with their guests before the show and during intermission, appeared in the show as well. They were joined by Beatniks’ regulars and friends, Dominique Mercier, Angie Lowe and the Tap Dancing Class!! With Cindy Wotkun on TECH.

The show was directed by Kim Bernstein. Tech support was provided by Cindy Wotkum. According to Bonnie Johnson, Kim comes in with a lot of ideas, but everyone else contributes ideas too. By the way, there is no redeeming social merit, here. The skits and jokes are designed to make you laugh – and laugh you will!

A few highlights:
• Steve Kaminsky’s frequent appearances as the ever-popular Elf on the Shelf
• Angie Lowe’s ruminations as the ever-cranky Maxine
• The return of the Old Babes and their hilarious interpretation of country song, “Save a Horse, Ride a Cowboy
• A unique celebrity match game with two volunteers from the audience
• Krystal Quagliara’s sort of intermediate class tap dancing their hearts out – with extra tapper recruited from the audience, Kathy Mertens

Beatniks Babes and Boys is a twice-a-year fundraiser for Beatniks. Their next outing will be coming in May.

Special to Beatniks – Where Art meets Joe – A Coffee House-Black Box Theater for your enjoyment:
• Delicious homemade snacks during every performance,
• Open Mic nights and concerts,
• Classes in Improv, Tap Dancing and Belly Dancing,
• The photography of Wes Bushby and of Carol Moore,
• Available for special events,

Next up at Beatniks: Hammond Community Theatre’s production of “You Better Watch Out” running December 8th through 17th.