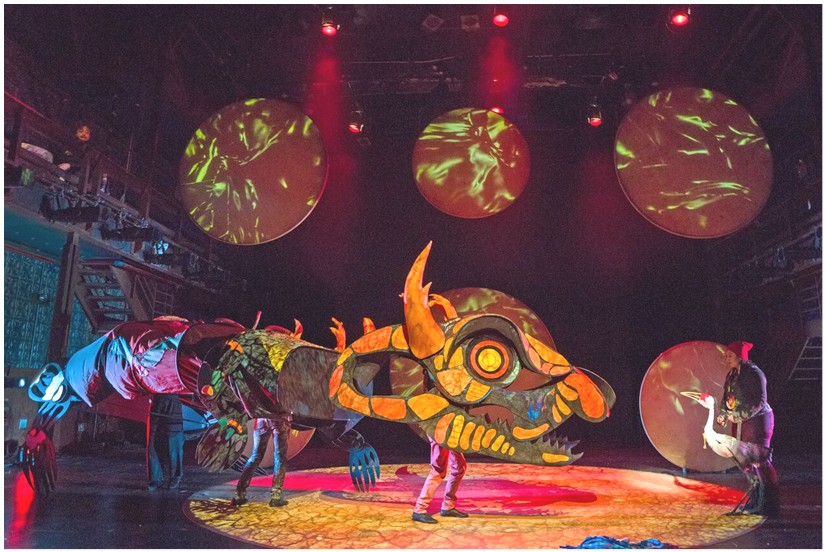 Highly Recommended **** The 3rd Chicago International Puppet Theater Festival kicked off with an appearance by Festival Founder and Artistic Director Blair Thomas, followed by a performance of “Ajijaak on Turtle Island”. By show time, there weren’t any empty seats in the beautiful Studebaker Theater in the Fine Arts Building, the festival’s home. We saw an awesome show incorporating Native American tradition, costumes, music and dance, along with Heather Henson’s (daughter of Jim Henson) graceful, expressive puppets. 4 Spotlights

A woman gathered her grandchildren around her for a story. When she chose the story of Ajijaak, she also chose a granddaughter to carry a glowing egg – and eventually to manipulate the Ajijaak puppets at different ages.

On Turtle Island, a pair of whooping cranes laid an egg. After Ajijaak hatched from that glowing egg, her parents cared for her as she grew. When time for their annual migration came around, Ajijaak was separated from her family. As she tries to make her way south, she faces many challenges, but is eventually reunited with her parents.

I hadn’t been to the festival before, but you can be sure I’ll be going again. I’ll be looking forward to the fourth festival in 2021.

The 3rd Chicago International Puppet Theater Festival continues through January 27th at venues throughout the city. For information about performances, venues and tickets, visit www.chicagopuppetfest.org/performances/.

Read all of my entire reviews at www.spotlightonlake.com.