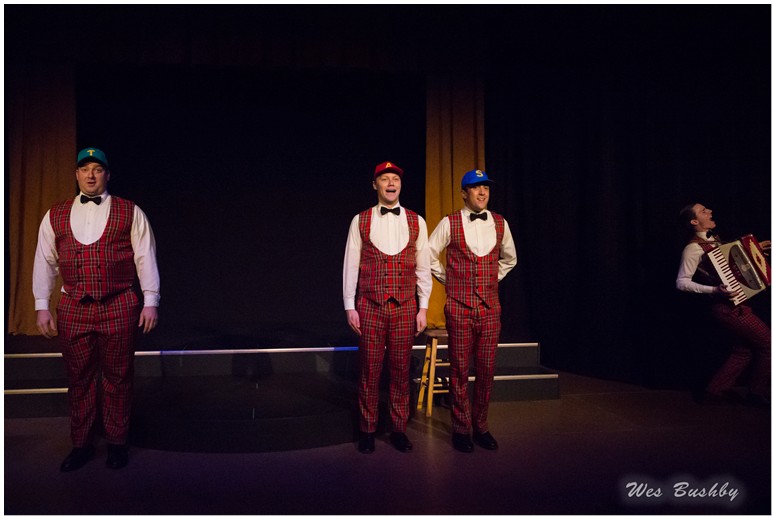 A Charming Production of “Plaid Tidings”​ at the Towle

**** Recommended **** After fifteen years of “Fabulous Fifties Christmas”, the brain trust at Hammond’s Towle Theater, Jeff Casey and Kevin Bellamy, decided it was time for a change, but not a huge one. It’s still the ‘50s, but they’ve gone Plaid! The cosmic VIP has given the Plaids another chance for a concert, this time at the Towle. You’ll love “Plaid Tidings”, a sweet, funny, feel-good holiday treat for everyone in the family. “Plaid Tidings” gets four Christmas candles (in lieu of spotlights).

I’m sure you remember the Plaids, the guys who charmed you in “Forever Plaid”, Jinx (Quinn Rigg), Frankie (Nate Strain), Sparky (Nick Arceo) and Smudge (Tyler Sonkin). The guys were on the way to their very first paying gig when their car was broadsided by a busload of Catholic schoolgirls on their way to see the Beatles on the Ed Sullivan Show. They got to come back to earth once to sing their one concert.

Suddenly, they’re on stage, but they don’t know why. Since they can see an audience they figure they’re supposed to do another concert. After introducing themselves, they try to introduce the piano player, but admit they don’t know her, since she came with the piano. She introduces herself as Elizabeth (Tuazin, Towle Music Director).
They begin with a standard – “Strangers in Paradise” – going on with Amor – which morphs into Hallelujah.

Something or somebody keeps changing standard lyrics to holiday lyrics. Even after Rosie Clooney calls to encourage them to sing, then drops hints (literally), it takes them a while to figure it out. Someone up there wants them to do a Christmas concert. Since they don’t have any Christmas material, they adapt a couple of their songs, leading off with a Christmas-y Calypso – think Matilda – with Christmas shopping lyrics!

To the Plaids, a snowstorm was a chance to sing back-up for Perry Como. They’d memorized all the back-up lyrics, but his real singers arrived after the snow was cleared. Still, this was a highlight of their non-performing career. Tonight, in an ingenious bit of staging, Perry Como appears on a big screen, and the Plaids really do get to sing back-up.

After an intermission, the Plaids return to the stage a little more prepared to sing carols. When they hear the sound of a bell ringing, they move over to a table full of handbells and proceed to play a carol. Inviting an audience member who looks a lot like Santa Claus to join them, they play another song with his assistance.

A really fun highlight of the show is the Plaid recreation of the entire Ed Sullivan show – with acts as diverse as the jugglers, performing seals, the Vienna Boys Choir, the Chipmunks, the Rockettes and, of course, the fat lady singing.

You’ll love these four cute guys embracing their inner nerd! “Plaid Tidings” runs through December 16th at the Towle Theater, 5205 Hohman Avenue, Hammond. Parking is free. Performances are Fridays and Saturdays at 8:00 pm; Sundays at 2:00 pm. Hurry and order your tickets, the shows on December 9th and 16th are sold out. Tickets are $19. FYI (219) 937-8780 or www.towletheater.org.