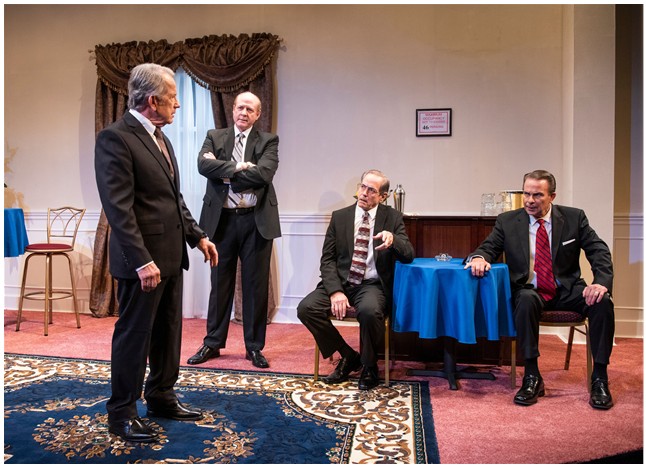 **** Highly Recommended **** I think everyone must have had the feeling sometime – you wish you could be a fly on the wall and see/hear what’s going on in that room.  With his brilliant drama, “Five Presidents”, Playwright Rick Cleveland has allowed all of us to get a glimpse of the things presidents and former presidents say to each other when they’re alone.  It’s a fascinating look into history in a kinder, gentler time in American history.  “Five Presidents” should be a must-see on everyone’s calendar.  4 BIG Spotlights

American Blues Theater’s production of “Five Presidents” runs through October 20th at Stage 773, 1225 W. Belmont Avenue, Chicago.  Valet parking is available.  Running time is 75 minutes, no intermission.  Performances are Thursdays through Saturdays at 7:30 pm, with a 2:30 pm matinee on Saturdays and Sundays.  There will be additional performances on Sunday, October 14th at 7:30 pm and Thursday, October 17th at 2:30 pm.  There will be no performance on Saturday, October 19th at 7:30 pm.  Tickets range from $19-$39.  FYI (773) 654-3103 or www.americanbluestheater.com.