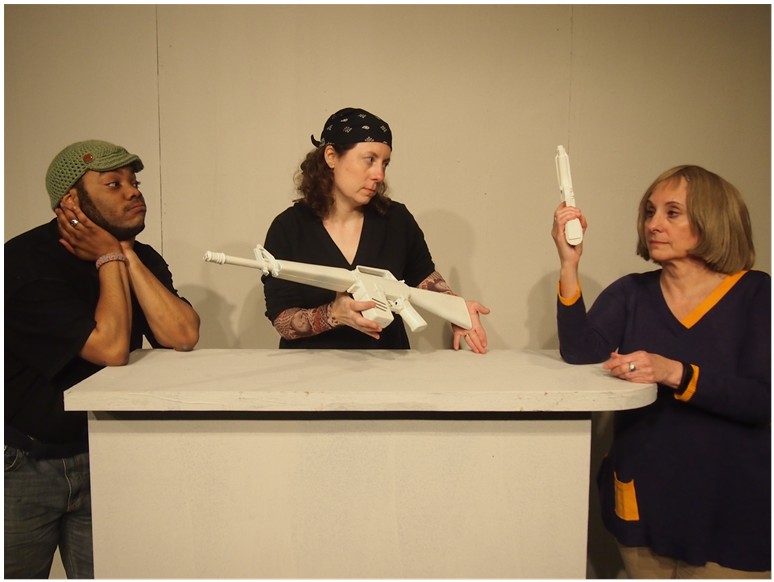 A Comedy with a Twist – “The Sleeper” at Beatniks

“The Sleeper”, Catherine Butterfield’s quirky little 2004 comedy, is a reflection of the distrust and paranoia which infected Americans after 9-11, but it’s also a suspense comedy with a diabolical twist!  This one is a must-see!

Gretchen (Laura Mazzuca Toops) looks and sounds like a typical harried housewife – or is she?  She’s a stay-at-home mother, which means she cooks, cleans and takes care of everything to do with the house.  She’s the room mother for her son’s class, so she spends a lot of time on the phone tree notifying the other mothers about TAD’s (terrorist alert day).  When she has time, she goes to lectures/workshops with topics like “How to Spot a Terrorist” and “Anthrax Alert”.

Gretchen’s husband, Bill (David M. Reyes), is too busy with an IPO to pay any attention to his wife, and only grudgingly agreeing to stay with the children while she goes to yet another workshop.

Gretchen’s self-involved, snarky sister, Vivien (Linda Slankard), is a move/TV star in her own mind.  She doesn’t understand why Gretchen got married, thinks she’s let herself go, and shudders at the thought of children.

Bill and Vivien, who reminded me of a Greek chorus, tease the audience with hints about some kind of mysterious event in Gretchen’s life.

One day while waiting in line, Gretchen met Matthew (Robert Hill), who said he was a tutor.  After hiring him to tutor her son, she has a romantic encounter with Matthew, which leads to another, and another ….

On one shopping trip to a toy store, in spite of the Salesperson’s (Anji Britten) scorn,  Gretchen buys a badminton set as a birthday gift for her son’s friend.  For some inexplicable reason, she goes back to that same Salesperson to buy a gun.  This hilarious scene, involving a white machine gun, has to be seen to be truly appreciated!

Kirstin Duncan and Khyel Roberson play all the other parts in the story.

“The Sleeper” runs through June 11th at Beatniks, 418/420 Conkey Street, Hammond.  Running time is 90 minutes, no intermission.  Performances are Friday and Saturday at 8:00 pm, Sunday at 2:00 pm.  Tickets are $15.00, including refreshments (after the show).  Street parking is available.  FYI (219) 852-0848 or www.beatniksonconkey.com.  Buy tickets online at www.brownpapertickets.com.