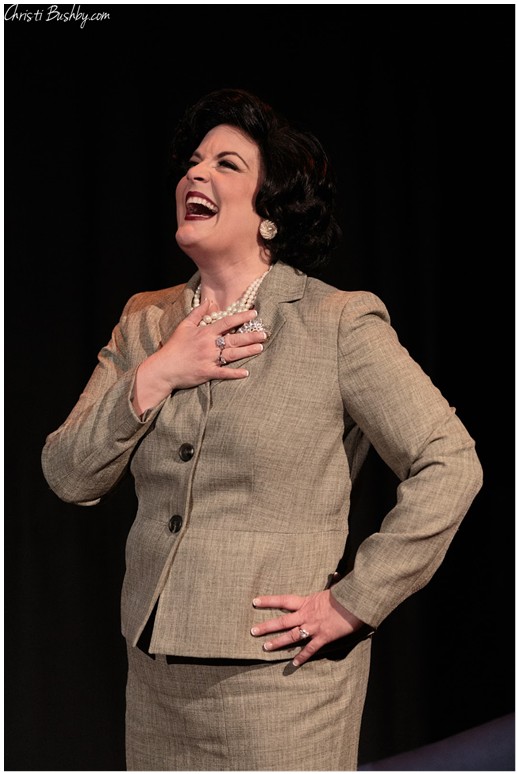 As the Towle audience finds their seats, they will see posters from four of hit movies which starred Vivien Leigh spotlighted against a black background.  Below the posters, there is a desk and chair, a coatrack, a settee and a chaise on an otherwise empty stage.

Wearing a dark coat, a scarf and sunglasses, Vivien Leigh (Wilczynski) enters the room.  By the way, although the title would indicate that this is a press conference, there are no reporters asking questions.  Just Vivien Leigh, alone on the stage.  As she is taking off her coat, she looks over the audience (of reporters), recognizing and greeting those she knows.

Lafferty took the facts of Vivien Leigh’s life – her career on stage and in films, her personal life, her marriages, her health (she suffered from tuberculosis and bipolar disorder) – and used them as a launch point for her one-woman play.  Her smooth writing style, combined with Wilczynski’s heartfelt delivery, make it hard to tell what is fact and what is fiction.

Using a credible British accent, Wilczynski has captured Vivien Leigh’s ladylike persona, her volatile personality, her mood swings, perfectly.  Wearing elegant pearls and a beautiful vintage suit with the perfect brooch on the lapel, she ranges across the stage, laughing, crying and sharing details of her life, stopping occasionally for a very ladylike bout of coughing.

In Lafferty’s vision, this press conference would be Vivien Leigh’s opportunity to lay all of her demons to rest, to redefine herself to her critics.  Leigh rambles through her life, flashing from the present to the past and back within seconds.  She shares delicious details about people she’s known, as well as the triumphs and tragedies of her own life.  Above all things, Vivien Leigh did not want to be defined by Scarlett O’Hara.

“Vivien Leigh: The Last Press Conference” runs through May 21st at the Towle Theater, 5205 Hohman Avenue, Hammond.  Running time is 90 minutes, no intermission.  Performances are Thursday through Saturday at 8:00 pm, Sunday at 2:00 pm.  There is no performance on Mothers’ Day, May 14th.  Tickets are $19.  Free parking is available just off Fayette Street with entry to the Towle through the alley entrance at the rear of the theater.  FYI (219) 937-8780 or www.towletheater.org.